With the exception of stereotypes*, it’s difficult to find information concerning Romani (gypsies) in Europe. Rick Steves has a brief article on his site, and George Soros’ Open Society Foundations gives a bit more information. For a continent obsessed with museums, only one exists** in Europe dedicated to the history and culture of the Roma people, a group numbering 10 million to 12 million people.

So, for a primer, I visited the Museum of Romani Culture in Brno. Established in 1991, it aims to “preserve examples of Romani cultural history as part of Europe´s  heritage. We educate the younger generation to be tolerant and appreciate other cultures. We are committed to fighting xenophobia and racism. We are paving the way to a new understanding of the roots of Romani identity. All this we do in the name of mutual understanding.”

The museum serves as a cultural center, though it’s not exactly a hub of activity. Passing an empty café and remembering the Czech for “ticket” (jízdenka), an employee  gave me a recorded audio tour in English and sent me upstairs. The sleek and artistic exhibits portrayed traditional dress, social relations, music, and art in a cohesive way, if a bit overwhelming by the end. Of my two hours spent there, I encountered five other visitors.

Romani have been in Europe for 1,500 years, according to a genetic study conducted in 2012. Leaving India, they reached the Balkan peninsula, and by the 1500s, were in almost every European country.

They didn’t keep a written history, preferring an oral tradition; thus, historical writings tend to reflect outside perception that recorded fact as much as fiction.

For any economics or sociology students, the history of the Romani is ripe: economic protectionism, restriction of movement, and slavery limited integration or coexistence, economic or cultural, into  European societies. (Also, a four-year-old Adam Smith was abducted by a Romani woman, according to 19th-century biographer John Rae). Medieval guilds, protecting against Romani mobile workshops, closed the market to Roma, who would have to move on from the area or turn to other, less-protected economic activity. Thus, Romani professions concentrated in metalworking, music, fortune-telling, entertainment, and tinkering. Unfortunately, guild protectionism was common across western Europe, and underdevelopment in the Balkans prevented economic advancement. Until the 1850s in Wallachia and Moldavia, Roma were enslaved. After emancipation, many became serfs. 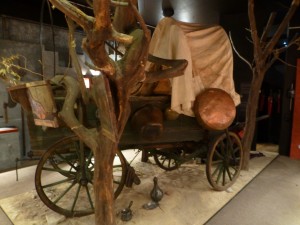 In many European countries, Romani could be killed at will, or branded and banished from the country under penalty of death if they returned. In the Czech lands, Roma settled mostly in Moravia. Groups in Bohemia were more closely related to German Romani.

When the Nazis came to power in 1933, German laws against Romanies had already been in effect for hundreds of years.  The persecution of the Romani people began almost as soon as they first arrived in German-speaking lands because as outsiders, they were, without knowing it, breaking the Hanseatic laws which made it a punishable offence not to have a permanent home or job, and not to be on the taxpayers’ register.  They were also accused of being spies for the Muslims, whom few Germans had ever met, but about whom they had heard many frightening stories; it was not illegal to murder a Romani and there were sometimes ‘Gypsy hunts’ in which Romanies were tracked down and killed like wild animals.  Forests were set on fire, to drive out any Romanies who might have been hiding there.

The oft-cited figure for Roma murdered during the Holocaust ranges from 500,000 to 1.5 million, but Taylor believes the figure to be “grossly underestimated.” Research into the condition and fate of the Romani during the Holocaust has increased in recent decades, but it remains overlooked. A Nazi gypsy camp in Lety, a village South Bohemia, is not a memorial like Dachau or Theresienstadt. It’s a pig farm.

According to the museum, 80 percent to 90 percent of Romani in the pre-war Czech lands were murdered. Controlled genocide did not happen on such a scale in Slovakia, but camps were built and persecution occurred.

After World War II, Romani in Slovakia immigrated to the Czech lands in search of employment an filling areas emptied from deaths and the expulsion of Germans from the Sudetenland. Under communism, the Czechoslovak state pursued forced assimilation, and banned nomadism in April 1958, which harmed the traditional model of a Romani family. Starting in the 1960s, however, state policy slipped away from assimilation in favor of integration, but with lackluster results. Medical sterilization continued into the 1980s. In 1969, a Gypsy-Romani Union was established to promote cultural identity and awareness, but state pressure during normalization after the Prague Spring forced its abolition in 1973.

Contemporary attitudes toward Romani are decidedly negative, and integration remains a problem. After communism fell in the Czech Republic, apartment blocks mixed with Czechs and Romani became segregated by one of the groups moving. As recently as 2012, French authorities offered $390 to Romani citizens if they’d return to Romania. The European Commission has integration strategies to improve socio-economic conditions, but until stereotypes (fair and unfair) and ignorance of Romani culture subsides, little progress will be made.

The Museum of Romani Culture does a wonderful job for the introducing history, culture, and music of the Romani, and the challenges they face. As xenophobic, nationalistic parties gain support across Europe, understanding marginalized groups within European societies is crucial. Toronto’s Romani cultural center provides a  reading list to learn more, but Brno offers a disappointingly unique chance for cultural immersion, if only for a few hours.

*”The key difficulty today in the EU and in Bulgaria’s thinking about Gypsies is that almost nobody [thinks] of them as normal individuals.
They are perceived by different government and Brussels programs as, on one hand, ‘betrayed and oppressed’ (in the human rights rhetoric), ‘isolated’, ‘ostracized’, ‘segregated’, ‘discriminated’ or as, on the other hand — by left and ‘right’ alike, ‘rough’, ‘stealing’, ‘underculture,’ ‘non-civilized’ and even ‘not-subject-to-civilization’, to refer just to a few of the Bulgaria public opinions, somewhat subtitled cliches.”

**Heidelberg, Germany has a Documentation and Cultural Center on Sinti and Roma, and the Ethnographic Museum in Tarnów, Poland has a section on Roma, but Brno is the only city with a dedicated museum.