Travel writing appeals to me because it’s possible to be honest and sincere, yet write something ignorant and vapid. That tension, and the problems it reveals, makes travel writing a sociological lens for perceptions and assumptions about foreign countries.

London, Paris, and Rome, for example, have mythical qualities and romantic notions associated with them. For post-communist countries, their image in the eyes of Americans and Western Europeans tend to be a less exaggerated version of the scene in Eurotrip where the backpackers inadvertently travel to Bratislava.

Doubly so for the Balkan countries. Analyzing that stigma, Bozidar Jezernik, a professor at the University of Ljubljana, wrote Wild Europe: The Balkans in the Gaze of Western Travellers. Drawing from historical accounts and travel narratives, Jezernik theorizes, in a nutshell, that western perception of the Balkans shed more light on the west than the Balkans. The Balkans, with Ottoman influence, mountainous isolation, underdeveloped economies, and a mixture of Roman Catholicism, Orthodox Christianity, and Islam, offer a convenient Other to contrast with Western European societies. As Jezernik writes in the fourth chapter,

Our story about men with tails is thus not merely an invention; rather, it is a story about how individual groups, nations or cultures perceive others. As they construct the social world, people try to determine which construct is best suited to give a certain event a meaning. At the same time, they define their experiences and generalise them in communication with others, so giving them a certain permanence. different periods, different social groups and different individuals recognise different constructs as suitable for their purposes, according to their various expectations and interests. Construction is therefore an endless process of giving meaning to the world. It reflects religious, ethical, political and other conceptions, in the context of which interpretations and evaluations are made, and what is important, unimportant, sensible or absurd is defined. These constructs tell us nothing about the groups of people they describe, but they are precious sources of knowledge about the group that constructed them, since what a group of people imagine about others is as a rule the mirror image of how they see themselves.

Traveling can trump prejudice and ethnocentrism, but it also reinforces them. A soldier in Afghanistan, Americans complaining that the French don’t speak English, and intellectuals trudging across the Balkans in the 19th and 20th centuries judge before they observe. The mindset and expectations a traveler carries shapes events and memories more than the people encountered during the travels.

Thus, peasants were dull and lazy because they didn’t have the mental capacity or desire to achieve more. Not because of restrictions based on social tradition or political fiat. And so on. It’s easy to get charmed by a romantic idea of western Europe and feel wary toward the Balkans and post-communist countries. In some instances, it’s less romance and more reality. Western Europe is richer and tends to have lower crime rates. Americans should take more caution in Bosnia than Ireland. But to look for things that compare unfavorably to home can transform travel into a game of “my place is nicer than this.” Don’t travel like Ron Swanson: 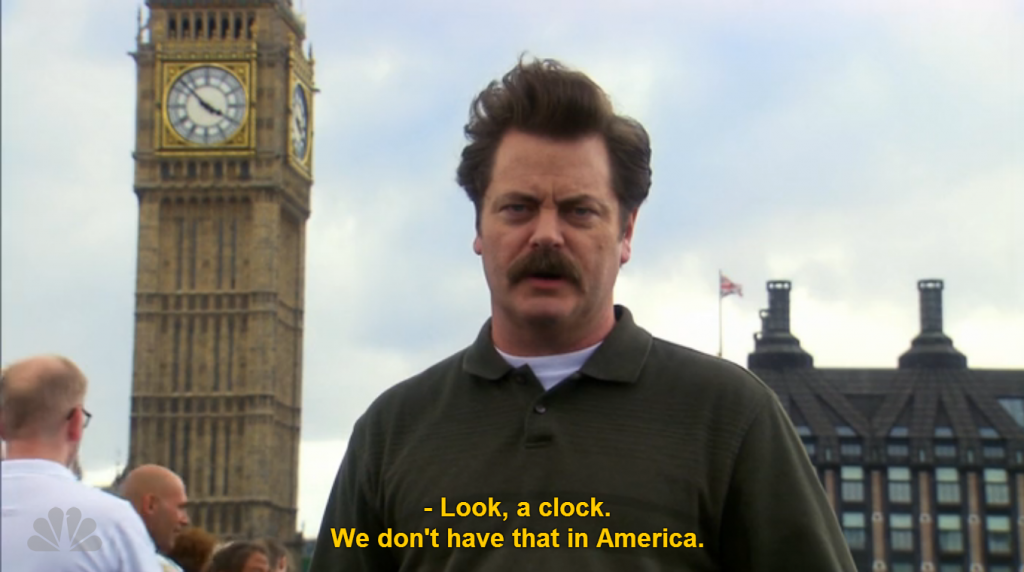 It’s difficult to cultivate a level of empathy that presses a shift from comparison to understanding, but doing so would make travel more enlightening.